CACH syndrome stands for Childhood Ataxia with Central Nervous System Hypomyelination. Today, the name leukoencephalopathy with vanishing white matter (VWM) is preferred. It is a genetic disease of the leukodystrophy family and it is one of the most common leukodystrophies, with a prevalence of about 1 in 80,000. It is one of the hypomyelinating leukodystrophies secondary to astrocyte damage. VWM disease displays a progressive degradation of the white matter in the brain.

VWM disease can occur in early childhood, often before the age of 4 years, but some patients do not show initial symptoms until adulthood. This syndrome is characterised by various neurological features, including progressive cerebellar ataxia, spasticity, and cognitive impairment associated with white matter lesions visible on brain imaging.

Five genes have been identified as carrying mutations that can lead to VWM disease. These are the genes for eukaryotic initiation factors or EIF2B1 to 5 which are located on different chromosomes. These genes each code for a protein involved in the initiation of translation, i.e. Protein synthesis.

Although VWM disease was originally recognised as a disorder in young children, it is now known that the onset and severity of the disease varies considerably, from a rapidly progressing prenatal or early childhood disease to a slower progressing adult disease. The syndrome usually leads to ataxia, spasticity, and variable optic atrophy.

In children, the disease most often appears before the age of 4 years in the form of motor problems, especially difficulty walking. Prenatal onset may be characterised by intrauterine growth delay, small volume of amniotic fluid, reduced foetal movements and/or contractures at birth. After birth, these children often show signs of encephalopathy, with irritability, drowsiness and seizures. Other organs such as the liver can also be affected in these early forms.

In adolescents and adults, on the other hand, it is common for the disease to begin with the onset of cognitive or psychiatric problems, but loss of acquired motor skills is common.

About half of patients have an initial sign of the disease after a triggering event, such as an infection or head injury.

The first 3 cases were described in 1993. Since 1997, 4 diagnostic criteria have been proposed:

Magnetic resonance spectroscopy can be used to obtain additional evidence for diagnosis. White matter spectra show a severe decrease, or almost complete disappearance of all normal signals, and a low presence of lactate and glucose.

When clinical suspicion is high, a VWM diagnosis is confirmed by genetically testing the 5 genes encoding the five EIF2B subunits, and homozygous or heterozygous variants are sought.

To put it simply…

Slow and steady wins the race!

In cells, an entire industry is responsible for making proteins. And for VWM disease, as for other leukodystrophies (see ELA info 103: LTBL), these are molecules involved in protein synthesis that differ in patients, and more precisely molecules that play an essential role in the initiation of translation, i.e. the first stages of manufacture.

EIF2B is itself a collection of several molecules, those made by the five genes whose genetic variants are at the origin of VWM disease.

To enable this first limiting step in protein synthesis, a cascade of events will lead to the assembly of a set of molecules, the initiation complex (corresponding to a production plant). The EIF2B complex is responsible for activating the formation of the Translation Initiation Complex, by activating EIF2:

The EIF2B translation initiation complex is necessary for normal translation of proteins. The genetic variants that cause VWM disease cause a partial reduction in the activity of this complex.

The five genes of the EIF2B complex are involved in the cell’s response to stress. The objective is to restore the cell by focusing on the production of cell repair elements. Patients with VWM disease have an increased susceptibility of white matter to cellular stress.

To put it simply…

When the going gets tough:

The other major function of EIF2B is the regulation of the Integrated Stress Response (ISR). In the event of cellular stress, an alarm signal is pulled by the cell to slow down the protein production chain and allow the cell to put things back in order. The cell will only make the proteins that are needed to put the cell back in order.

The five genes each coding for one of the subunits of the EIF2B complex influence protein synthesis under cellular stress. Their mutation leads to a disturbance in the maturation of astrocytes, the white matter cells associated with neurons, and causes increased susceptibility to cellular stress for the white matter. Doctors are therefore envisaging a way to try to improve the response of these cells to stress by promoting the ISR pathway.

When the ISR pathway is activated, the phosphorylation of EIF2 on its small subunit, called “alpha”, transforms EIF2. Instead of being activated by EIF2B, EIF2 becomes a competitive inhibitor of EIF2B, which means that it prevents the formation of the translation initiation complex and inhibits overall protein synthesis. The objective is to restore the cell by focusing on the production of cell repair elements.

Patients’ quality of life and comfort can be improved by managing the symptoms of the disease. Most patients have occasional neurological attacks, which can usually be well controlled with medication. It is important to control these attacks and take preventative measures against head trauma, and to avoid antibiotics and treatments for fever (antipyretics).

Guanabenz is a long-time antihypertensive treatment known by doctors, which also targets the response to cellular stress. 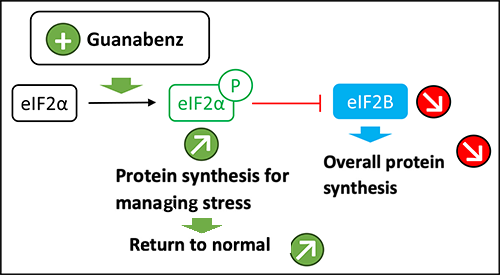 Treatment of mice with leukoencephalopathy with loss of white matter with guanabenz for 8 months showed an improvement in white matter parameters. This preclinical work has now led to the consideration of the first clinical trial in VWM patients. As guanabenz is an old and safe drug, the first clinical trial is being prepared in partnership with ELA. This trial will include about 15 children in order to establish the optimal dose, establish the safety of the drug in these children, and measure changes in their motor and cognitive abilities over a two-year period.

ELA supports clinicians and researchers working on leukoencephalopathy with vanishing white matter. Research must continue to improve the understanding of the pathogenesis of the disease, to develop specific treatments and, ideally, to identify a cure. With a first clinical trial today, there is hope that patients’ lives will improve tomorrow.