1 JUNE 2021: OPENING OF THE 1st CLINICAL TRIAL FOR CACH SYNDROME 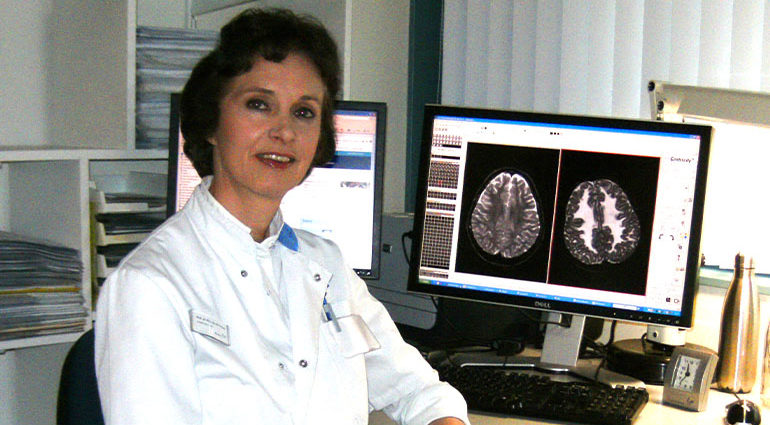 CACH (Childhood Ataxia with Central Nervous System Hypomyelination) is a rare genetic disease of the hypomyelinating leukodystrophy family, also known as leukoencephalopathy with vanishing white matter (VWM). It is characterised by a progressive degradation of the white matter in the brain, leading to various cognitive disorders and muscle stiffness. These disorders may go unnoticed at first, making early diagnosis difficult. When suspicion is high, the diagnosis can be confirmed by genetic testing. The disease often manifests itself in early childhood, but some patients do not show symptoms until adulthood. There is currently no treatment, only symptomatic treatment is offered for the treatment.

Research teams have been working for years to speed up diagnosis, understand the mechanisms of the disease, find new markers, move towards new therapies, and improve patient management.
Marjo van der Knaap’s team at the VUmc (Center for White Matter Disorders of the VU University Medical Center in Amsterdam, the Netherlands) has been interested in leukodystrophies, but also specifically in CACH syndrome for several years. The gene associated with this disease was identified by the team in 2001 and for the past 20 years, with the support of ELA, researchers have focused on understanding the mechanisms of the disease. As a result of this research, a promising molecule has been identified that could improve the condition of these patients. This molecule, guanabenz, has been marketed for many years in the United States and Europe for the treatment of hypertension in adults. It acts on the cellular stress response (cell defence mechanism) which is involved in CACH syndrome.
The team of researchers led by Marjo van der Knaap has set up a clinical study with the aim of testing the effectiveness of the molecule in the disease as quickly as possible.

This study is aimed at CACH patients who are 10 years of age or younger at the time of inclusion in the study, and for whom the diagnosis has been confirmed genetically and by medical imaging (brain MRI). Only patients, whose disease appeared before the age of 6, who are still able to stand up and take at least 10 steps in a row without support, whose diagnosis was made before the age of 8 and who live within a reasonable distance from Amsterdam, are eligible for this study. Patients will be monitored regularly with a visit to the VUmc every 3 months for a clinical and neurological examination and a blood test. An annual MRI will complete this monitoring and an annual evaluation of the quality of life will be done by means of questionnaires.

ELA International is supporting this trial and is contributing €500,000. This study has been open since 1 June and will be conducted for at least one year. It may be extended to 3 or 4 years depending on the progress of recruitment, which is expected to reach 20 patients.

By supporting clinicians and researchers working on leukodystrophies, ELA is once again involved in the development of international research. Research must continue to improve the understanding of the disease and to develop specific treatments. This first clinical trial on CACH represents real hope for these patients and their families.