Research Symposium on 2 and 3 December in Luxembourg 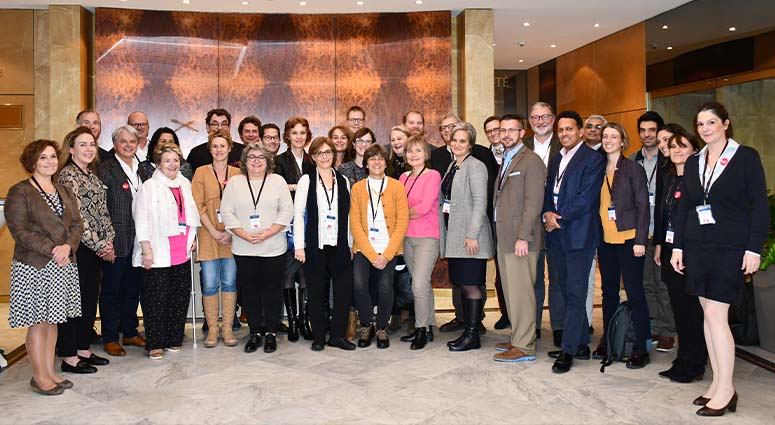 World experts on leukodystrophies brought together by ELA International to advance research.

ELA International has brought together about thirty eminent researchers from different countries (United States, Italy, Spain, United Kingdom, Germany, Holland, France,etc.) to enrich their mutual approaches to leukodystrophies (degenerative brain diseases which affect 20 to 40 births per week in Europe), and thus advance research.
The event, placed under the High Patronage of Her Royal Highness the Grand Duchess, was inaugurated by Guy Alba Founder of ELA, President of ELA International, in the presence of the Presidents of ELA Belgium, ELA Spain, ELA Italy, ELA Luxembourg and ELA families associated with the support of the ATOZ Foundation.
Guy Alba recalled the progress made during these 27 years (discovery of new genes, biomarkers, new therapeutic approaches) that researchers can be proud of.
Three priority themes were discussed:
• Neonatal screening for leukodystrophies
• New therapies
• Women with leukodystrophy

At the symposium, ELA International announced the launch of an exceptional call for tenders in spring 2020, funded to the tune of €500,000, for the launch of a clinical trial for women with adrenoleukodystrophy or Pelizaeus-Merzbacher disease. These women, who for a long time were considered to be unaffected by the disease, are now recognised as patients in their own right. However, there is very little information and research about their situation. These women, in addition to being sick, are often mothers to a sick child, and give priority to caring for their child, to the detriment of their own medical care. ELA would like the community of experts to look into their case.
On the occasion of Giving Tuesday, International Donation Day on December 3, ELA launched an appeal for generosity to fund this new clinical trial. We are now at the initial phase of the first treatments thanks to the hopes generated by several initial clinical trials on sick children and adults.
We owe these tremendous advances to our donors, as ELA finances all its actions exclusively through donations.