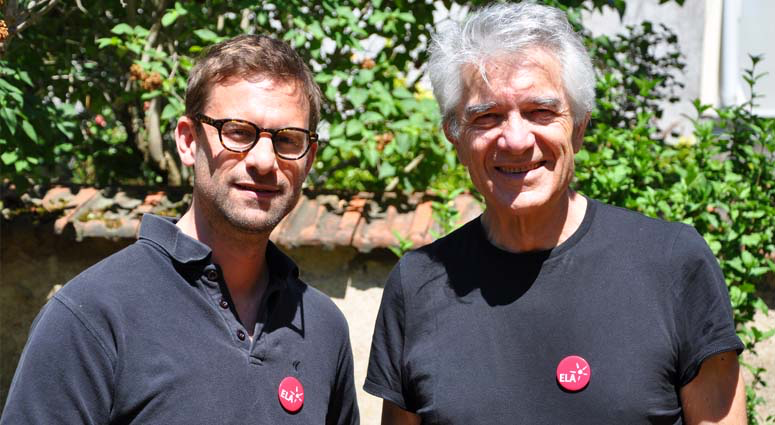 Nicolas Mathieu, winner of the Goncourt 2018 prize for his novel ’Their Children After Them’, did us the honour of writing ELA’s 16th dictation.The inspirational and poetic dictation was , magnificently illustrated by Baru, Grand prix d’Angoulême 2010.

• Nicolas Mathieu: I am an author andI haven’t done a dictation under duress for 25 years now. I was delighted to write the ELA dictation because it’s both for a good cause, and it’s also a nice exercise in style to tell a story in a few words that will be read to more than 500,000 school children. What can be better than when pleasure joins a good cause.
• Baru : My name is Hervé Baruléa. I shortened my name because it’s a name of Italian origin. I became Baru and I’ve been a comic book author for almost 40 years. I know ELA, I have already participated in its actions. I also happen to be a fan of Nicolas Mathieu’s early days. I had loved ’Aux animaux la guerre’. His last book speaks so well of my region and who I am. I immediately agreed with him. When I was asked to illustrate Nicolas Mathieu’s dictation, there was absolutely no two ways about it.
• Nicolas Mathieu: You flatter me, but I have to say it, I also drew a lot from your books. I still remember having described blast furnaces with your images before my eyes.

ELA: How did you get the inspiration for this dictation text?
• Nicolas Mathieu: When I was a kid and the time came for the dictation, it was hell. I wasn’t good at grammar or spelling at all, it was a real anguish. It was this conflict that I lived through every time there was a dictation that inspired me to tell this story. The idea I want to convey is to tell ourselves that dictations are difficult, you feel unpleasant at the time but you get through them.

ELA: What message do you want to pass on to the children through this text?
• Nicolas Mathieu: When an adult talks to them about a painful moment such as a dictation, in retrospect it shows them that we are not condemned to it forever and above all I wanted to convey this desire to run for ELA.

ELA: How did this text resonate with you?
• Baru : I was very good at dictation, in fact I was an excellent student! In any case, my mother was convinced of it. I liked the fact that I approached dictation from this angle, that is to say as a source of suffering. So I tried to use the drawing to play down the fear of the dictation in favour of something more dynamic, more joyful, like being able to run away, to escape the drudgery. I tried to downplay the drama so that all the kids would say “Come on, it’s not as bad as it sounds”.
• Nicolas Mathieu: In Baru’s drawing there is a lot of élan, a beautiful élan, it’s a reflection of how we see the kids. The race is illustrated as if we were catching up right before a fall. I think that for this initiative we need a maximum momentum.

ELA: What message do you want to deliver through this creation?
• Baru : I come back to the basics of ELA. I think that ELA is a very noble cause because it concerns relatively few children who have this disease. So when others donate their energy – I find there is something symbolic in this gesture – there is energy that we are going to send to those who need it. When they run, my characters are on the verge of falling… I was a PE teacher and I know that walking and running are actually forward falls that you can avoid by moving one foot forward. So to give the illusion of running when you draw, to create movement and dynamism, you just have to place the characters on the brink of a fall.

ELA: Is movement important for you? To move for a cause?
• Baru : Yes, it’s almost figuratively speaking, moving for a cause.. That is, the kids are invited to move, to do something on their own and at the same time, they will move for it.
So automatically, it’s a saturated metaphor, I think it’s good, and inspires other people really need to adhere to this initiative.

ELA: Words can produce commitment?
• Nicolas Mathieu: I think so. The political ideas I have come from the books I have read. And I believe that often the great books, the good books, the ones that engage us, work like big fires on a beach, that is to say that we come to gather around them and it coalesces wills, people who agree on a certain number of definitions, on ways of approaching the world, on anger and inspiration. Literature does not change the world, but it at least allows us to recognise each other and to form coalitions of allies.

ELA: Do you think that schools and colleges can be places where solidarity can be developed?
• Nicolas Mathieu: All human communities can be places for the development of solidarity. Solidarity is like revolution, it only needs a spark to make it happen. That’s what we’re trying to do here, to set something in motion so that there will be a snowball effect on that day, so that there will be a lot of people and that we will collectively stand together. It’s beautiful to see the masses coming together for a few. It’s worth sticking together.

ELA: What advice would you like to give to children?
• Nicolas Mathieu: The rising generations are less selfish than ours. They are more aware about environmental problemsand we see new forms of solidarity emerging everywhere. Honestly, I find that they are more virtuous than the baby boomers, these young people.
• Baru : That this habit that they’ve now picked up, to keep it for the rest of their lives. It’s a precious asset, the sense of solidarity. And then, perhaps, that will allow us to go further, we can imagine going towards group solidarity, class solidarity… it’s only together that we’ll manage to make things change anyway.