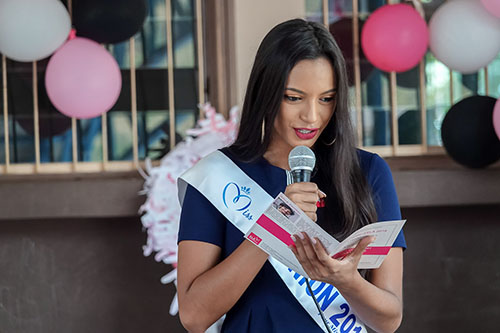 ELA Indian Ocean took advantage of the presence of Guy Alba and Jean-Luc Corti, President and Secretary General of ELA International respectively, on Reunion Island to put the spotlight on the ’Put on your sneakers on and beat the disease’ campaign in schools. On 29 October, they were present at the Saint-Leu Centre School for the ELA Dictation.

Floriane Palmieri, Director of the school welcomed the personalities invited for the occasion: Philippe Eugène, Deputy Academy Inspector representing the Rector, Morgane Soucramanien, Miss Reunion 2018, Nathan and Maël, both suffering from Ravine syndrome (a form of leukodystrophy), accompanied by their mothers Carine and Nathalie.
Under the courtyard,

early 200 children gathered that morning. This year, it was Miss Reunion 2018 who had the privilege of reading the text titled ’Leukodystrophy’ written especially for ELA by Alice Zeniter, winner of the Goncourt des Lycéens 2017 prize.

At the end of the dictation, Carine and Nathalie answered the children’s questions. Their daily life, Maël and Nathan’s schooling and the impact that this type of event can have, were at the heart of the questions. They answered them with great sincerity, following the example of Guy Alba, who insisted on the importance of raising awareness of these rare diseases among the pupils and raising funds to finance research and support for families affected by these pathologies. Morgane Soucramanien then went on to stress the importance of her role as ambassador for Reunion Island and in particular her wish to support the fight of ELA Indian Ocean families. For his part, Philippe Eugène emphasised the need for greater participation by Réunion’s schools in this solidarity and citizenship operation led by ELA.

The morning ended with music. All the children of the school gathered and sang the song “For the children of ELA”. A particularly strong moment of communion that preceded the traditional family photo.
Soon after the dictation, the pupils took part in the second stage of the operation and ran for their sick classmates. The dynamic teaching team set up an original event, to say the least. Inspired by the Grand Raid, an emblematic race in Reunion Island, the children tookpart in a relay race covering 164.6 km of the famous endurance race.