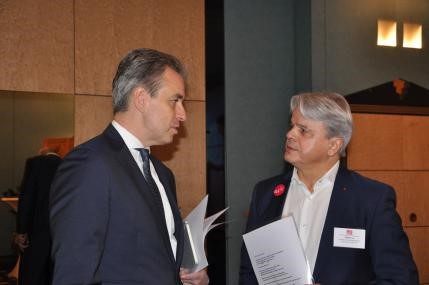 At an event organised by ELA International, eminent specialists from several disciplines and countries (USA, Italy, Spain, England, Germany, Holland, France,etc.) were brought together in the presence of patient representatives to enrich their mutual approaches to leukodystrophies (degenerative brain diseases that affect 40 births per week in Europe). The event was opened by Guy Alba Founder of ELA, President of ELA International and Claude Meisch, Minister of Education and Research. Guy Alba recalled the progress made during these 25 years (discovery of new genes, biomarkers, new therapeutic approaches) which researchers can be proud of. However, despite this progress, the efforts must continue to stay strong.Claude Meisch welcomed the initiative of ELA International and recalled Luxembourg’s commitment to support research on rare diseases in connection with European networks. ELA International has thus brought together biologists, doctors, pharmacists, industrialists and scientists to reflect together on new therapeutic approaches. This symposium was organised with the support of:
• The ATOZ Foundation
• MedDay Pharmaceuticals
• Hotel Le Royal – Luxembourg

The topics discussed were:
• Promising treatments acting on microglial function and innate immunity in the brain
• Role and potential impact of these treatments in leukodystrophies
• Possible clinical trials in patients with leukodystrophy
Since its creation, ELA has invested 42.6 million euros in medical research corresponding to the funding of 497 programs, which makes ELA the number one funder of leukodystrophy research.
In 2015, ELA International was created in Luxembourg to multiply its action in Europe and around the world. Behind Zinédine Zidane many sponsors and personalities are mobilizing.
ELA exists today in Germany, Belgium, Spain, France, Italy, Japan, Luxembourg, the Indian Ocean and Switzerland to unite, and step up the fight against leukodystrophies.