A new discovery in Zebrafish 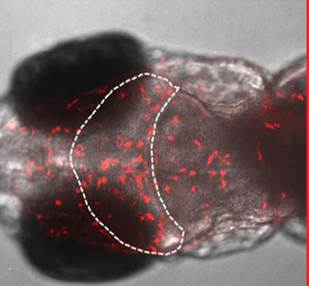 A grant funded by ELA International: a new finding in zebrafish could help us better understand how leukodystrophies develop.

Leukodystrophies are rare genetic neurological diseases affecting the white matter of the brain, the myelin. They result in the loss of all vital functions and cause serious physical and mental disabilities in children. 1 in 7600 children has a leukodystrophy with symptoms that usually appear in the first year of life and gradually worsen as the child grows. Very few treatments are currently available for these rare diseases.

A research from a team within the Bateson Centre and the Neuroscience Institute of the University of Sheffield in the United Kingdom, funded by ELA and conducted by Dr. Noémie Hamilton, reveals a new role for defective immune cells in the brain, called microglial cells. They could contribute to the development of a form of leukodystrophy in which a mutation of the RNASET2 gene (Ribonuclease T2) is involved.

In a healthy brain, almost half of our neurons disappear at embryonic stage. It is a natural event that regenerates our nerve cells produced in large numbers and ensures many brain functions. The role of microglial cells (which job is to ensure the immunity of the nervous system) is to eliminate them by phagocytosis (ingestion and digestion).

Animal models of leukodystrophies are rare and do not often present similarities with human pathology, they do not present characteristic brain defects or motor problems as seen in human patients. Zebrafish (Danio rerio) are commonly used in biomedical research and more than 70% of their genes are similar to those of humans. It is used to better understand the cellular mechanisms involved during the development of certain diseases.

Dr Noémie Hamilton and her colleagues created the first zebrafish model for leukodystrophy with mutation of the RNASET2 gene and showed that this model had similar physical and cerebral defects to those observed in patients.

Using the zebrafish that is transparent, the development of the brain and the role of microglia can be easily observed with a microscope using fluorescent tags for cells of interest. The research team found that microglial cells in the zebrafish brain were altered during the neuron elimination process, consequently the zebrafish developed a leukodystrophy.

According to Dr. Noémie Hamilton “We have shown that the microglial cells in our zebrafish model cannot digest their contents because of defects in their lysosomes which does not allow microglia to operate normally. This is associated with an important inflammatory response that could damage the brain and be the beginning of the disease.”

To validate this discovery, the team of researchers wants to test therapies targeting microglia during brain development. They hope that results will lead to a clinical trial and to new therapies in children affected by this form of leukodystrophy.

This study highlights the importance of studying early dysfunctions during brain development to better understand the onset of these serious diseases.