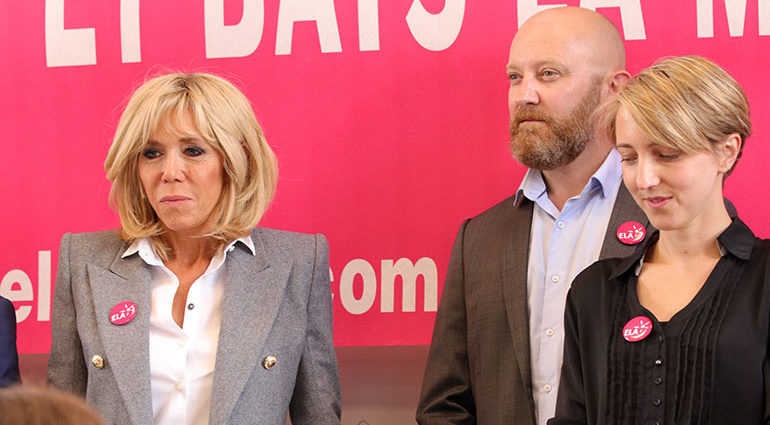 The objective of this campaign, supported each year by the Ministry of National Education, is to raise awareness in schools about leukodystrophies and then to raise funds to finance research and support for families affected by the disease. This year, thanks to the exceptional mobilisation of all the participants, more than 2.5 million euros were raised.

Let’s revisit  the 3 highlights of this campaign which was launched by Brigitte Macron.

The official launch of the  ‘Put on your sneakers and beat the disease’ campaign at school whereby ELA’s Dictation helps educate students about disease, solidarity, difference, and disability. This year, the talented Leïla Slimani, winner of the 2016 Goncourt Prize, wrote an original text titled ‘Une histoire sans fin’.This is how, on October 16, Brigitte Macron and more than 400 personalities lent their voice to ELA to convey a message of solidarity.

Schools took action by organising an operation, most often sporting, which allows students to symbolically lend their legs to their sick classmates who can no longer use them. The spirit of surpassing oneself marks their commitment to the fight against ELA and gives a lot of hope to families affected by the disease. Prior to this, students look for people around them who agree to reward their effort in the fight against leukodystrophies by making a donation or a pledge.

In each school participating in our campaign, a student is appointed ambassador by their teaching team or classmates. The chosen student is the one who best embodies the values ​​of solidarity and citizenship conveyed by our campaign.

The Ambassador Award takes the form of a national ceremony. It took place this year on June 6 at the Cité des Sciences et de l’Industrie in Paris, bringing together the students who have invested the most in the Association. Above all, this is an opportunity to reward and thank the ambassadors who receive a diploma, as a symbol of their civic commitment. Now is also the time to learn more about ELA’s struggle and meet the families and sponsors of ELA. Finally, it is also a time of exchange since the students meet ambassadors from all over France.

Thanks to everyone’s mobilisation, research is progressing, but the fight is not over!

The 25th edition of ’Put on your sneakers and beat the disease’” began on Monday, October 15, 2018 in schools with the ELA Dictation and continued with a great week of mobilisation in schools from October 15 to 20, 2018.